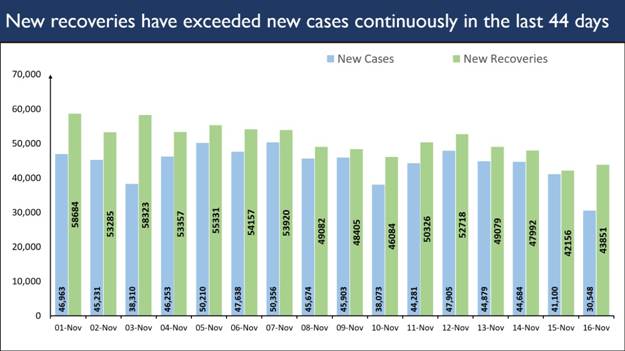 Daily new cases numbering 30,548 is a historic low that assumes significance given many countries in Europe and America are experiencing a continuous steep rise in daily new cases.

The Government’s efforts to continue to maintain high levels of comprehensive testing have resulted in bringing down the net positivity to sustained low levels.

78.59% of the recovered cases reported in the last 24 hours are from ten States/UTs.

76.63% of the new cases have been reported from ten States/UTs.

14 States/UTs have death per million higher than National Average of 94.

13 States/UTs have a Case Fatality Rate higher than National Average.

The Union government is working in close co-ordination with these States/UTs to improve their clinical care management of the critical patients in the ICU, through a carefully developed Standard of Care protocol which covers the private and government hospitals and provides guidelines for hospitalised cases and those in home isolation. Multi-disciplinary central teams are also deputed to States/UTs to provide them support in COVID management.

High level meetings are regularly conducted for review of the public health response measures being taken by the State/UT governments.