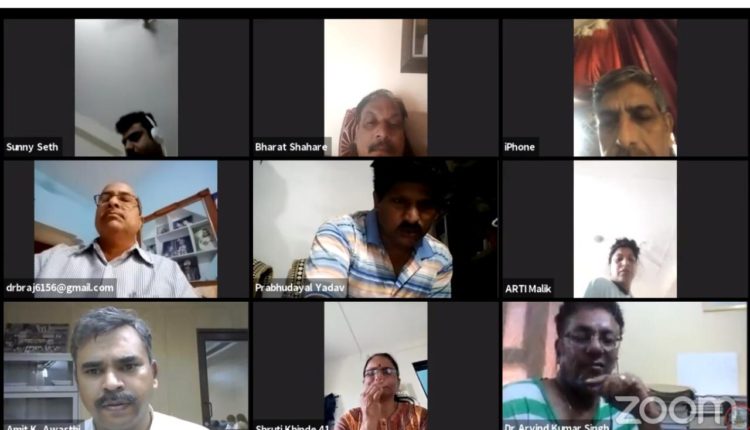 Vedas are the source of fundamental mathematics: Dr. Vishwakarma in national workshop by Gautam Buddha University

The “Vedic origins of mathematics and its various dimensions”, two-day national workshop came to an end today at the Gautam Buddha University under the aegis of the Shiksha Sanskriti Utthan Nyas. Nyas conducts awareness campaigns against the evils in education in India and is a social organization for making necessary changes in education. The main objective of this workshop was to establish a connection between the ancient tradition of Vedas and mathematics. This workshop was organized to discuss these topics. In the last session of this, Dr. Vikas Pawar discussed various aspects of Vedic mathematics and threw light on the philosophy of mathematics in the Vedas. Dr. Pawar said that our Indian tradition considers Vedas to be eternal, even though some people do not believe it, but it is universally accepted that Vedas are the oldest written evidence. He discussed the historical, computer and teaching dimensions, etc., and put different dimensions of Vedic mathematics in front. Dr. Panwar discussed number from the point of view of Vahanesika philosophy of Kanad and told that the existence of number is with the physical world. Number is a scripture which is today called Mathematics. The session was conducted by Dr. Sushil Kumar.

The keynote speaker of the final session, Dr. Kailash Vishwakarma, All India Convenor Vedic Mathematics, Shiksha Sanskriti Utthan Nyas, shared with participants his experiences on research possibilities on Vedic Mathematics. Dr. Vishwakarma said about a verse ‘Om Kham Brahma’, that the creation of the universe is made from zero and yoga. ‘Yoga means to add’. The hypothesis of zero started from here. Addition, subtraction, multiplication is the result of all the Vedas. Call it Indian Mathematics, Hindu Mathematics, Vedic Mathematics, Buddhist Mathematics or Jain Mathematics, all of which have originated from the Vedas. Dr. Vishwakarma said that in Vedas a detailed description is given about the methods of various numbers. The place value system is India’s best contribution to the world. The study of Sanskrit is not compulsory for Vedic mathematics, it can also be studied without it. Kailash ji gave a detailed discussion on the Hexa decimal system and gave information about books on Vedic Mathematics and finally consider Ramanujan’s contribution to mathematics and asked the students why the world deliberately complicated mathematics. Encouraged everyone to understand the simplicity of the mathematics subject from the theory of Vedic value.