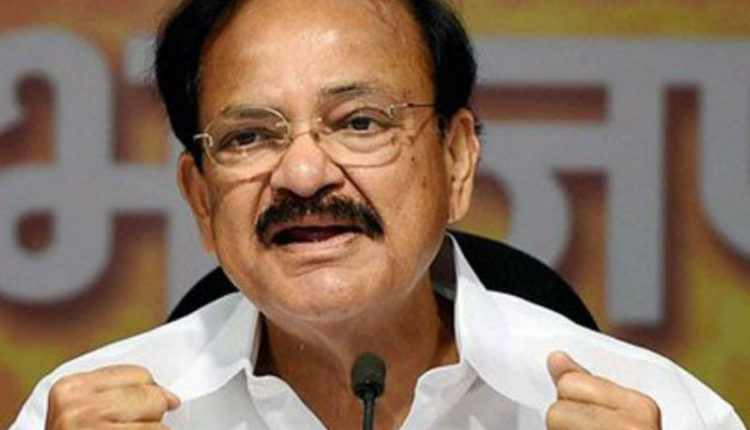 The Vice President of India, M Venkaiah Naidu today called upon the youth to be at the forefront in scripting India’s growth story.

He was releasing a biography in Tamil on former President, Dr A P J Abdul Kalam at Raj Bhavan in Chennai. The book titled “Abdul Kalam- NinaivugalukkuMaranamillai” is written by Dr. Kalam’s niece, Dr APJM NazemaMaraikayar and well-known space scientist, Dr.Y.S. Rajan. Lauding the authors for bringing out the book in Tamil, he said that writing in the mother tongue was the best way to reach out to the masses.

Observing that one of India’s biggest strengths was its demographic dividend, Naidu called for fully leveraging it to fast-track progress in different sectors—from agriculture to manufacturing and ensure a sustained growth rate in the coming years. Pointing out that about 65 per cent of the country’s population is below 35 years and 50 per cent is below 25 years, he said this is the time for the youth of the country to be at the forefront in accelerating the progress.

Paying rich tributes to the former President, Naidu urged the youth to take a leaf out of Dr. Kalam’s book and believe in themselves. “They must aspire to become job-creators rather than job-seekers,” he added.

Stressing the need to overhaul the education system to make learning an enjoyable experience right from primary education, the Vice President said that students must be encouraged to pose questions and think critically. “The New Education Policy is a great leap in this regard. It does away with artificial segregation between curricular and extra-curricular activities and aims at the holistic development of the child”, he added.

Recalling Dr Kalam’s passion to ignite the young minds, the Vice President said that he used to always visit schools and interact with students. “He inspired thousands of students through his unforgettable words, magnetic presence and a warm smile”, he added.

Stating that the former President firmly believed in using technology for the benefit and well-being of the society, the Vice President said “In fact, Dr. Kalam can be credited with laying strong foundations of ‘AtmaNirbharta’ in our space and defence sectors, on which, our scientists and engineers are building today”.

He said the legacy of self-belief left by Dr Kalam left has motivated the scientists in developing our own vaccine today.“Even with medical equipment, having started modestly, we are now exporting PPE kits, N95 masks and ventilators to other countries”, the Vice President said and complimented the government and the scientists for their untiring efforts in bringing out the vaccine for COVID-19.

He said the development of the vaccine in a short span and at an affordable cost was a “remarkable achievement”.

Naidu said that Dr.Kalam will always be remembered for his indomitable spirit and never-say-die attitude even in the face of adversity. He pursued and persisted with discipline, hard work and confidence, he added.