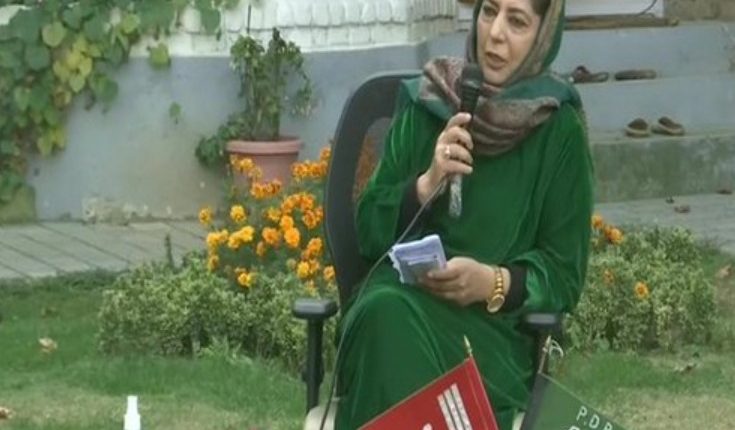 Will raise Indian tricolor only after J-K flag is brought back, says Mehbooba Mufti

People’s Democratic Party (PDP) chief Mehbooba Mufti, who has recently been released from detention, has said that she will raise the Indian tricolour when the “flag of Jammu and Kashmir” is brought back.

Addressing a press conference on abrogation of Article 370, she said: “My flag is this (points to the flag of J&K kept on the table in front of her). When this flag comes back, we will raise that flag (tricolour) too. Until we get our own flag back, we won’t raise any other flag…This flag forged our relationship with that flag.”

“Our relationship with the flag of this country is not independent of this flag (Jammu and Kashmir’s flag). When this flag comes in our hand, we will raise that flag too,” she added.

|”We have acceded to a liberal, democratic and secular India. We are uncomfortable with today’s India,” Mufti said.

Mufti said that Jammu and Kashmir came into an international spotlight like never before after Article 370 is revoked.
“It is a fact that China captured 1000 sq km of our land. I think we somehow managed to get back around 40 km. China speaks of Article 370 too. They say it is disputed and ask why was J&K made UT? Jammu and Kashmir came into international view like never before after abrogation,” she added.

Mufti, who was in detention from August 5 last year following the abrogation of the special status of the erstwhile state, was released on October 13.