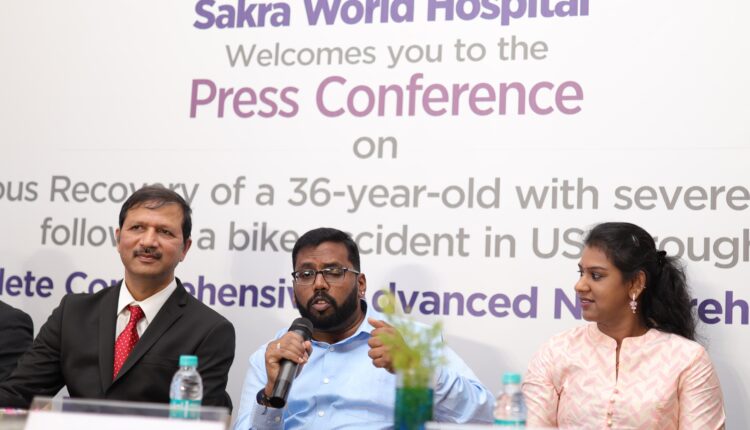 January 18, 2023: Not all hopes die if you know the way out and believe in miracles. When 36-year-old Mr. Pravin Raj Radha met with a fatal accident in the US after he fell from his bicycle in May 2022, he suffered severe brain, facial and eye injuries which resulted in leaving him at a comatose state and losing all hopes of his survival. His condition was treated immediately in one of the top hospitals in the US, undergoing intensive care where the US doctors estimated less than 1% chance of survival. Pravin shared his story of getting a new lease of life today at a press conference in the presence of Mr Yuchi Nagao, MD at Sakra World Hospital, Mr Naoya Matsumi, DMD at Sakra World Hospital and Mr Lovekesh Phasu, COO at Sakra World Hospital, and Dr Maheshwarappa B M, Head and Senior Consultant for Neuro Rehabilitation at Sakra World Hospital as well as Pravin’s treating doctor in India.

Despite being on a ventilator in the ICU in the US for 3-4 weeks, Pravin’s health never improved. Rather than giving up and taking Pravin off the ventilator, he was flown carefully to India by chartered flight with ICU team and equipment. After consulting in other hospitals, Pravin was referred to Dr. Maheshwarappa B M, Head and Senior Consultant for Neuro Rehabilitation at Sakra World Hospital, one of the top hospitals in Bangalore. He immediately assessed Pravin’s complex traumatic brain injury, severity of disability and medical challenges, loss of cognitive and behavioral skills and immobility. Following his recommendations for rigorous and comprehensive neuro rehabilitation using advanced technologies, a miraculous recovery and successful discharge took place five months later.

Dr Maheshwarappa B M explained that “Neurorehabilitation plays a significant role in the healing process of those who have suffered traumatic brain injuries. The Rehab program is designed based on the patient’s condition and needs to help them recover from the arduous effects of the injury. Pravin was brought to us in the most challenging situation with almost all hopes of his recovery dying down. But for us, after assessing his condition, not all hopes were lost. We developed the rehabilitation program at Sakra Neurorehabilitation Centre to address his core problems, utilizing advanced rehabilitation equipment and scientifically enhanced infrastructure.”

A 3- to 4-month intensive neuro rehabilitation program helped Pravin come out of a coma and begin a steady recovery process. In addition to muscle strength exercises, Pravin also received multi-sensory stimulation (auditory cues, tapping, music therapy) to regulate his low arousal levels. Over time and with self-determination, he has been able to walk independently with good balance. For his cognitive and perceptual skill improvement, occupational therapies / involved identification of objects, participation in sports activities in groups, vocational activities like writing, using the keyboard, using a mobile handset, dressing himself independently, bladder and bowel management, bathing. His family members were totally engaged in a patient-centric approach and immensely contributed.

Neuropsychological intervention helped with cognitive, emotional and behavioural outcomes that are often seen after brain injury. Along with medication for mood issues; behaviour modification techniques and cognitive retraining was carried out to facilitate his adjustment and functionality. The family including his wife and parents were regularly counselled and supported emotionally to cope with all the challenges of living with brain injury.

Over the past three to four months, he has made significant progress and is currently able to understand, speak, and communicate. His cognitive functions are improving except for mild memory impairment. He is able to sit, stand, and walk without any assistance and perform all daily tasks confidently.

Pravin was successfully discharged in December 2022 after undergoing what seemed like a herculean task. His cognitive, physical, and social skills had been remarkable improved. In addition to supervised gait training, fall prevention, functional ability training, memory training, and cognitive retraining, he continues to receive rehabilitation at the OPD after discharge. To prepare him for his return to his profession, specialists are working on advanced life skills training.  This is a perfect example of comprehensive neurorehabilitation using a collaborative multidisciplinary approach which is globally recommended as the best evidence based practice.

Thanking the doctors at Sakra World Hospital, Pushpa, Pravin’s wife said, “Pravin’s accident shocked us, but what was even worse was when doctors had started giving up hope of his revival to his old self.  I am grateful to the doctors and team at Sakra World Hospital who assessed his condition rightfully and took up his case, carefully designed his rehabilitation program, involving us. It is no less than a miracle that Pravin is up on his feet, and we are hopeful that he will resume his work soon.”

DXC Technology and BHUMI collaborate to transform the Government schools in Sikri, Rajasthan