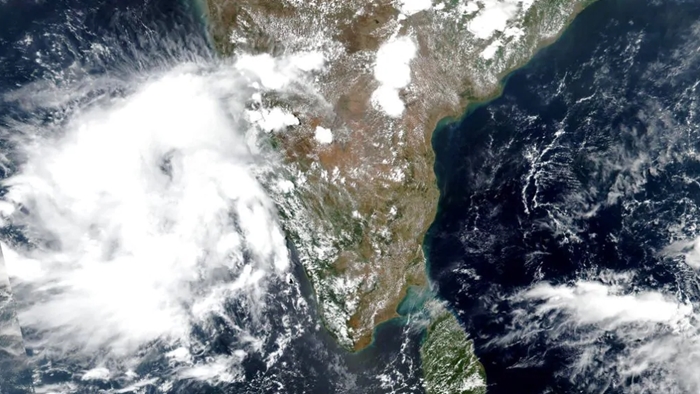 It is very likely to move north-northeastwards and cross north Maharashtra coast close to south of Alibagh (Raigad District, Maharashtra) during the afternoon of today the 03rd June as a Severe Cyclonic Storm with maximum sustained wind speed of 100-110 kmph gusting to 120 kmph.

The system is now being continuously tracked by the Doppler Weather Radars (DWRs) at Mumbai (Maharashtra) and Goa.

Forecast track and intensity are given in the following table:

Fishermen are advised not to venture into Eastcentral and Northeast Arabian Sea and along & off Karnataka-Goa-Maharashtra-south Gujarat coasts during next 24 hours.

After the landfall the Severe Cyclonic Storm is very likely to maintain its Cyclonic Storm intensity for about 06 hours, while moving north-northeastwards across north Madhya Maharashtra. Under its influence Gale wind reaching 60-70 kmph gusting to 80 kmph very likely to prevail over Pune, Ahmadnagar and 55-65 kmph gusting to 75 kmph adjoining Beed, Nashik & Aurangabad districts of Maharashtra. Light to moderate rainfall at most places with heavy to very heavy falls at isolated places are also very likely over these districts on 3rd June, 2020.

(i) Minor damage to power and communication lines. (ii) Damage to Kutcha and some damage to Pucca roads. (iii) Breaking of tree branches, uprooting of small trees. (iv) Damage to banana and papaya trees. (v) People in affected areas to remain indoors.

(Please see details and UPDATED graphics in this link here)