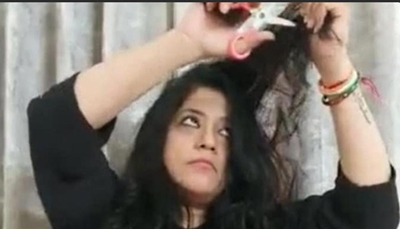 Noida, 8th October, 2022: While protests are ongoing in Iran following the death of Mahsa Amini, 22, who was detained by morality police enforcing severe hijab laws.

However following her deaths protests have now erupted in at least 50 Iranian cities, towns, and villages. And the fire of the same has reached Noida too, where a woman named Dr Anupama Bhardwaj has joined a legion of women in expressing their support for Iran’s anti-hijab protests by shaving her hair in solidarity.

Women in Iran have openly shaved their heads and burned their hijabs in protest of the country’s strict laws.

People are screaming ‘Death to the Dictator,’ asking for the termination of the Supreme Leader, Ayatollah Ali Khamenei’s, three-decade dictatorship.

Even after an increasing death toll and a harsh reaction by security forces using tear gas, clubs, and, in some cases, live bullets, social media footage showed protestors calling for the destruction of Khamenei establishment.

Neighbour kills girl to settle score with her brother