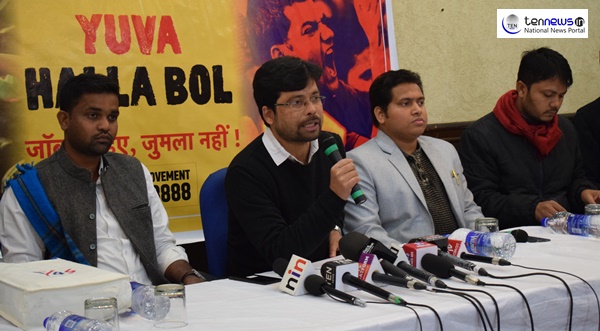 New Delhi: (08/01/2019) Yuva Hallabol movement is holding a historical “Youth Summit” on 27th January in Delhi, where youth leaders and representatives protesting on the issue of unemployment in the country will come together. Apart from these youth leaders, groups protesting against all selection commissions and recruitment boards will also rally together.

Launching the official website of Yuva Halla Bol, Anupam informed that in the times to come, it will be not only a credible source of information regarding various youth movements against unemployment, but also an important platform for unemployed youth to join and contribute in the movements.

Referring to the frequent instances of paper leaks, Yuva Halla Bol said that it is unfortunate that such incidents have become so common that now they fail to get attention from the mainstream media and the public in general. Due to an increase in instances of paper leak, the youth is loosing confidence in fairness of selection procedure. Yuva Halla Bol notified that only in year 2018, the papers for about 24 exams got leaked.

Gaurav, who is associated with Yuva Shakti Sangathan, an organisation working continuously on the issue of unemployment, said

“Government has failed to fulfil the promise of generating about 1 crore jobs yearly. It was due to failure of the previous government to fulfil its promises that the youth of this country placed its trust in the Modi government which has decreased the employment opportunities available rather than generating new ones.”

Manish Kumar, the convenor of Youth for Swaraj, said,

“The movement, Yuva HallaBol movement started during the Nationwide SSC protests, in March 2018. Since then, they have fought against the irregularities in almost all other exams. He said that in last 10 months, Yuva HallaBol has become a bold voice against the lack of availability of and corruption in appointments in government jobs.”