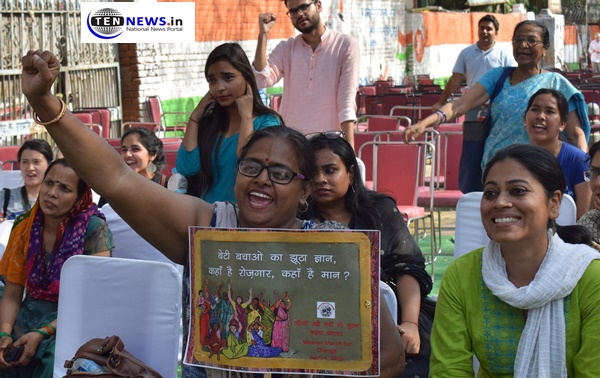 Women March For Change: Hundreds of women gathers at Jantar Mantar against gender based violence!

New Delhi: (04/04/2019) With just few days left for the Lok Sabha election 2019  women across the country marched in protest of the current environment of hate and violence at Jantar Mantar in New Delhi. The March is to claim their constitutional rights as citizens of a democratic republic.

March was organised under the Banner “Aurtein Uthi Nahi to Julm Badtha Jayega”.Women March for Change is happening at hundreds of places in different states in India. In national capital of New Delhi, the March started from Mandi House at and culminated at Jantar Mantar.

She further said, “While gaps in healthcare needs of women have persisted over the years,the anti-people anti women steps being taken by the current Government in the health sector have increased the barriers to women’s access to health and health care. This government’s lack of commitment to Health for All, including women’s health Is evident In the cuts imposed on public health spending.”

No talks of alliance are going on with AAP: Sheila Dikshit